Portfolio:
All PortraitureArchitectureSculptureDecorBooks
Home   ›   Portfolio   ›
Dodo     ‹ Back to portfolio 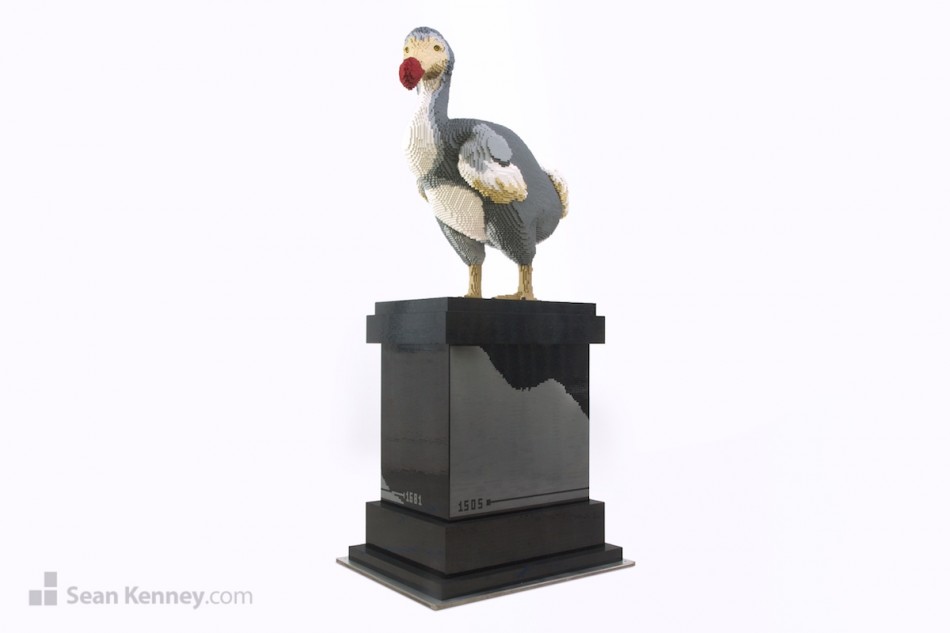 This sculpture is part of my traveling exhibition, Animal Super Powers. Check the exhibit schedule After visiting the dodo’s native country of Mauritius, I was amazed at how quickly humans could destroy an entire species.  The chart on the pedestal shows the dodo’s population, starting when Mauritius was settled by the Dutch in 1583, ending in complete extinction only 176 years later.

The dodo is the embodiment of animal endangerment, which is why I chose to make this sculpture look like a grand monument. This sculpture is nearly 9 feet tall and took 668 hours to design and build together with my assistants Meghan, Haksul, and Natsuki.

My assistant Jisun took the design lead on this project; It was difficult to determine exactly what a real dodo looked like, because no one has ever photographed one.  There are only a few drawings from the 16th and 17th century that we could reference, none of which could agree whether the dodo was grey, blue, or tan.  We also studied other contemporary artists’ interpretations of the dodo and eventually came up with our own interpretation of what we felt the dodo really looked like. This is the tallest sculpture we’ve ever created.  It’s built in two sections (bird + base) to make it easier to transport. This sculpture is part of my traveling exhibition, Animal Super Powers.