Portfolio:
All PortraitureArchitectureSculptureDecorBooks
Home   ›   Portfolio   ›
Back from the Market with Mom     ‹ Back to portfolio 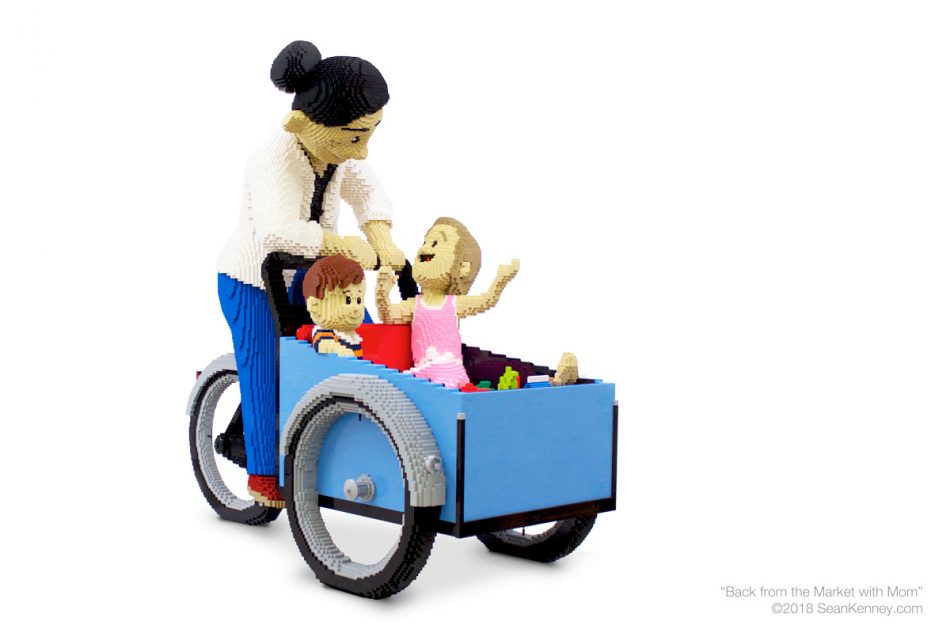 Cargo bikes are a common sight in Scandinavia and throughout Europe, but they have yet to catch on in America. As an urbanist I am a big proponent of alternative transportation, and as a New Yorker, I envy European cities’ progressive cycling infrastructure. I personally own a bike much like this one and use it as my primary means of running errands and taking my young children from place to place.

In creating this sculpture, I wanted to capture the simple joys of everyday life as a parent, while solidifying the image of a cyclist as that of a normal person doing normal things, and having fun in the process. Rather than life-model real people and create a realistically-proportioned bike, I wanted this to look like “cartoon sculpture” with soft, shapes and exaggerated proportions.  Everything from the character’s facial features through to the squashy proportions of bike parts and vegetables are intentionally highly-stylized.

To give the sculpture a sense of motion,the mom’s and daughter’s hair are gently blowing in the wind, and the bicycle’s spokes were intentionally omitted. We photographed the sculpture alongside the bike lane that runs past my Brooklyn studio. I’ve always been a cartoonist, which is why I think that LEGO toys work well as a medium for my sculpture. Rather than life-model real people and create a realistically-proportioned bike, I wanted this to look like “cartoon sculpture”.

The goal was to make soft, cartoon-like shapes.  Everything from the character’s facial features through to the squashy proportions of bike parts and vegetables are intentionally highly-stylized. The mother and children began as pencil sketches, which were later digitized as 3D fully-animated CG characters and posed into the final scene you see.

Using the 3D model, my assistants and I used a computer program to digitally drew LEGO pieces into the final shape of the model, creating a schematic that we could use to finally physically build it. The cartoon faces were designed “on the table” the old-fashioned way, with lots of building and rebuilding.  Culminating from over 15 years experience creating art with LEGO bricks, I used nearly every trick and technique available (and some new ones to boot) to make the sculpture look exactly the way I needed to. The bright, saturated colors that LEGO pieces come in lends itself particularly well to making some of the details in the sculpture really ‘pop’. We had a lot of fun designing and building the little girl’s rainbow socks, the boy’s striped shirt, as well as all the different groceries that we chose to keep simple yet recognizable – the baguette, the pink egg carton, the blue milk carton, the oranges, the wine bottle, and more. This sculpture premiered in the art gallery at Scandinavia House on Park Avenue in Manhattan in 2018.