Portfolio:
All PortraitureArchitectureSculptureDecorBooks
Home   ›   Portfolio   ›
Cartoon self portrait     ‹ Back to portfolio 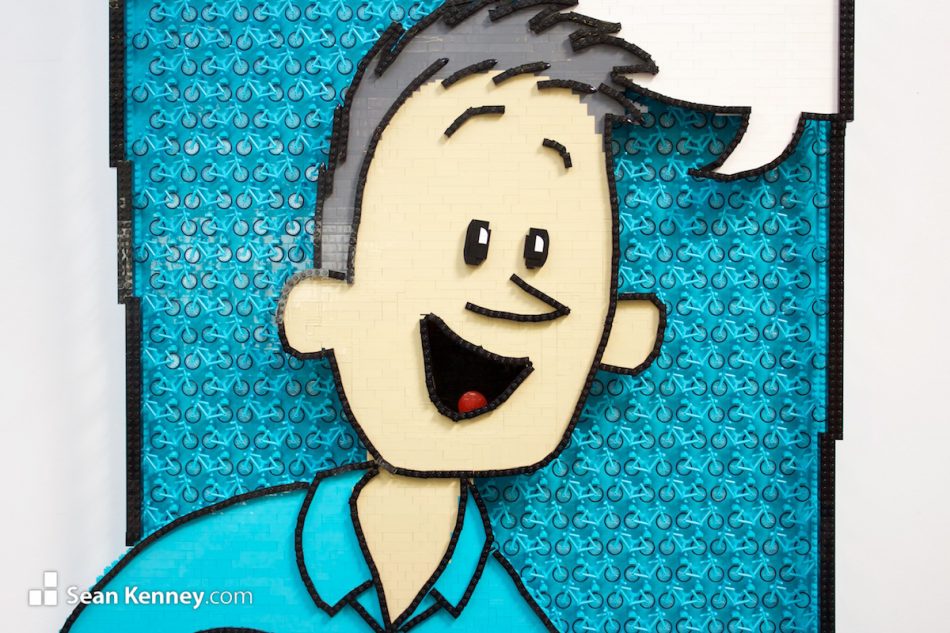 I’ve been a cartoonist all my life, and over the last few years I have been actively trying to infuse my cartooning back into my LEGO sculpture work to create work that is innately personal and unique.   (Samples)   I’ve been experimenting with the idea of building models of my hand-drawn cartoon pencil strokes.  For this sculpture, I wanted to create a semi 2D/3D multi-planar effect, as if a flat cartoon had popped out of the Sunday Comics and was about to say hello to you.  The sculpture started off as this drawing: The biggest challenge was keeping the gesture and spontaneity of my pencil lines when translating the drawing into LEGO bricks.  I wanted to make sure the drawing looked like MY drawing, not like someone’s copy of my drawing.  I’d also originally wanted to get more line weight into the model, but given the restrictions of the medium, I had to settle for something that looked more “inked” than pencil-drawn. To start, my assistant Gabriel (above) printed out an enlargement of my original drawing, and began “tracing” the lines with LEGO bricks.  But these only served as guidelines, because they would flop and bend when we tried to move them off the paper. So to translate the lines onto the final model, I had to “redraw” the model with the LEGO bricks by placing and editing the lines on the fly, much as if I was drawing it again it with a pencil.  To do this, I pointed a camera directly at the model (above) which transmitted the image onto a monitor in front of me.  I could then work physically close to the model while simultaneously seeing it upright and from far away.